Previous
Next
About project
Short info
Systems used
Download
About project
The Skyline Belgrade project is a complex of impressive size in a prestigious location in the city center, ie at the largest and most important hub in Belgrade - the Mostar loop. At the crossroads, on the river bank, close to the city center that never sleeps. Israeli investor AFI Europe has invested in a unique project for this part of Europe. The entire project consists of three separate towers and a retail mall. The two towers planned for residential units have a total area of ​​34,000 m2, while the central tower, a commercial one, will also have an area of ​​34,000 m2. This complex will offer its tenants special amenities such as: private pool, spa, reception, maintenance and a range of recreational facilities. The central, tallest tower in the complex will have a height of 134 meters, which will be the highest point in the city, and is designed as a business and office space. FEAL is working on a project to completely "dress" this fascinating object. Based on the architectural project of one of the world's largest and most famous architectural offices "MYS arhitects" led by the famous architect Ami Moore, FEAL was given the project task to design a completely new element facade adapted to the elliptical contours of the building, with a combination of large glass surfaces and aluminum panels which extend over three rasters. In addition to the enchanting visual effect, the Skyline element of façades with an area of ​​around 18,000 m2 should also meet high performance criteria, such as water resistance, resistance to wind loads, blowing and high sound insulation requirements. On the sides there are two residential towers (79m and 68m) that conceptually correspond to the central tower, but are adapted to the comfort of living, with FEAL's advanced aluminum-wood system Termo 75 DA which has a thermal conductivity Uw = 0.92 W / m2K . The Termo 75 DA system provides special living comfort, as the outer part has the strength and durability of aluminum, while the inner wooden structure gives warmth to homes inside the Skyline. In addition to the Termo 75 DA system, FEAL's 50 FK systems, blinds, facade cladding as well as ventilated facades are installed in these facilities.
Short info
Systems used
Download 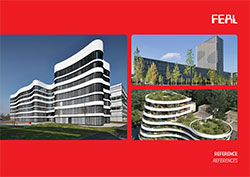 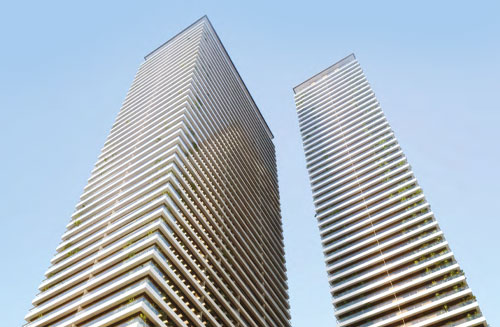